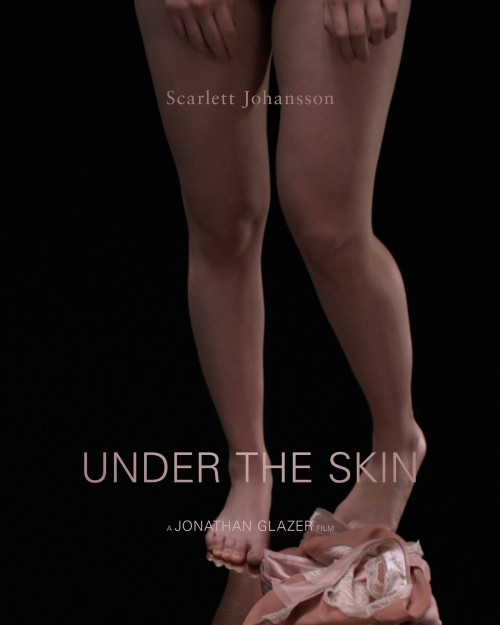 If Lars von Trier’s Nymphomaniac implores us to “forget about love“, then Jonathan Glazer’s acid-sharp body-snatcher thriller Under the Skin seems to be asking us to forget about sex too, at least “as we know it”, both in real life and movie convention.

Adapting Michael Faber’s novel of the same name, Glazer casts Scarlett Johansson as a woman on a mission to seduce and kill as many male Glaswegians as she can manage, working on the orders of what appears to be an unsavory research team of some kind (whether they’re aliens or just morally bereft scientists is never really spelled out in the film itself).

Beyond that, however, the audience is as much in the dark as Scarlett’s victims (the protagonist is never named), and this is the key to the film’s appeal: a journey through complete emotional disconnect which seems to suggest that something may just be developing around its edges.

Species it certainly ain’t, but is it just an art house variant of the cheap slasher film?

Throughout the film’s first half – which I would perhaps somewhat paradoxically argue is its strongest – one is tempted to answer “yes” to that question. Though devoid of cheap thrills and ultimately meandering – and therefore non-sensational – in how it presents the predator-prey encounters, Glazer knows how to calibrate our response to imminent menace, and his finely-tuned aesthetic sense is exploited for terror wonderfully here.

Playing into – rather than playing up – Johansson’s status as a Hollywood sex icon, Glazer derives both suspense and humour from the central conceit (ScarJo cruising for men).

A key scene, which takes place on a beach, will probably be among the most-discussed segments of the film. Actually not spurned by an ostensibly sexual encounter, it’s a depiction of complete callousness that cuts to the bone, with our (alien or otherwise) protagonists looking on impassively as tragedy unfolds right in front of them.

The scene is also another example of Glazer’s calculated vision. It’s a mathematical arrangement of unpleasant details: crashing waves over a dangerously rocky beach, a thwarted rescue, a screaming child left behind. Genuinely gripping, or just well-curated contrivance? It really is up to you to decide, and I think that a film which exists on such finely-tuned polarities is worth exploring.

That said, its second half is substantially weaker. A plot development is allowed, which – perhaps necessarily, perhaps not – deflates some of the tension and attempts to wrestle with themes that deserve a full film in their own right, not the tail-end of one.

But that an aura of mystery is maintained throughout can certainly be appreciated, and in developing the idiosyncratic atmosphere of the film, Glazer owes much to composer Mica Levi, whose score is by turns minimal and overwhelming (the signature tune bursts in almost as if it’s been snuck out of an Italian ‘giallo’).

But it’s Johansson, of course, who turns out to be his bravest and most consistently compelling collaborator. The Guardian’s Leo Robson used “prick her and she doesn’t bleed” to describe her performance, and I won’t bother trying for a more economical or apt descriptor. This isn’t a wooden performance masquerading as ‘laconic’ or ‘depressed’; this really is a consistent, stark display of non-being.

Though Faber’s (and now Glazer’s) story is at its core an old one – think Frankenstein, better still, think Pinocchio – Glazer is to be commended for going full-bore against that most comfortable of narrative short-hands: making characters and situations ‘relatable’.

Chilly and immersive in a way that can only be fully experienced on the big screen, Under the Skin is a sinister blank canvas. What you see most definitely not what you get. Or is it?

Under the Skin will be showing at St James Cavalier, Valletta on 28 June and 3 July

Thanks to the miracle that is the internet, I was given the opportunity to contribute to Filmkrant’s critical round-up of the European continent’s cinematic produce, where I was asked to focus – of course – on the Maltese Islands.

The project appealed to me because contributors weren’t expected to scrounge around for hard facts and statistics, or trot out iron-clad opinions. Instead, they were hoping to create a collection of ‘slow criticism’ pieces, which would hopefully offer up a more ephemeral and intimate glimpse of European cinema.
To quote the magazine’s editorial:

‘We weren’t looking for facts & figures, for economics & industry, but for a snapshot, some instantaneous, and haphazard exposure, an examination of the cinematic pulse, a shipwrecked treasure from the tidelines, a message from the fault lines of history and the trenches of life. We asked them to be foreign correspondents in their own countries, travelling ambassadors in the realm of cinephilia, to lend us their ears and eyes and hearts and other senses to become the intelligences of this weird and wonderful beast that is Europe.’

Click here the editorial and links to all contributions.