First off: I have returned!

Yep, on the off chance anyone’s listening… I’ve just come back from a very inspiring trip to the UK which encompassed a stop to the ever-gorgeous Edinburgh, as well as the not-exactly-gorgeous Scarborough.

Scarborough, however, played host to Fantasy Con by the Sea — aka this year’s edition of the British Fantasy Society’s annual celebration of fantasy and horror literature, rounded off by the Society’s prestigious awards, the most notable of which were this year snatched up the likes of Naomi Novik, Catriona Ward and Ellen Datlow.

I’ll be blogging more about the trip in general (and the Con in particular) very soon, but first, I’d like to big up a more immediate creative concern.

(‘We’ being myself and the awesome artist Inez Kristina)

We’ve got a Patreon page running.

And we’re offering free prints on it RIGHT NOW.

You can follow this here link to find out all about the giveaway, and root around the very same Patreon page for more information on the comic itself, which will be Malta’s very first serialized comic, and should also be a hoot for fans of Star Wars, HP Lovecraft, Guillermo del Toro and all those concerned with the alarming facts of the Anthropocene Era (no, really).

You’ve got until Tuesday to avail yourself of the free prints offer, but I do so hope you will also support us in the long run.

Watch this space for more… of Mibdul, and other stuff too.

“The fuschia is shallow-rooting and hence requires frequent watering, so drainage must be fast enough to carry away all excess. A mulch of peat or sawdust will keep roots cool and supply moist air when watered frequently. You cannot overwater fuschias if the drainage is good … Growing fuschias in bush form is easy. You control shape of the plant by regular pinching or pruning. Shortening of the main branches and pinching back of shoots produces a busy, stocky plant. Leave the branches fairly long if you want a plant with a loose open habit of growth” – Joseph Buttigieg 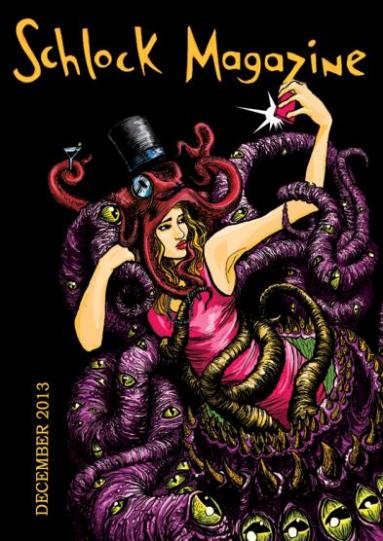 It started with a casual discussion at a now-defunct reggae bar: what if we created an online version of, say, Weird Tales?, I asked my friend Peter.

He said sure why not – a lot of our friends like to write and draw and stuff.

And so five years on, Schlock Magazine has continued to pollute the internet superhighway with an eclectic mix of prose, poetry and illustration – originating from us in Malta but, gradually, extending all over the globe.

We have since featured interviews and even fiction by authors like Jeffrey Ford and Angela Slatter, and we have names like Ken Liu, Nathan Ballingrud, Laird Barron and Karin Tidbeck lined up for the coming year.

Needless to say, I’m quite proud of what we’ve accomplished so far, and grateful for all the readers and contributors we’ve received over the years.

I hope you continue reading. For now though, I hope you find it in yourself to check out our December 2013 issue, which also doubles up as our 5th year anniversary issue.

My story, ‘Bones’ has been published on the newly-revamped zine Le Monde N’est Pas Rond, accompanied by an illustration by the always-great Daniela Attard (‘Iella‘).

Run by my friend Antoine Cassar, ‘Le Monde’ is a truly dynamic, multicultural and multilingual publication that takes a creative approach to migration, borders and human rights. Do give it a look.

An inspiring weekend can make all the difference to your creative biorhythms, and I’m pleased to report that last weekend was one of them.

Maybe it’s the psychological glut caused by competitions like Nanowrimo (to say nothing of Movember) and its awkward position as the penultimate month of the year, but this November in particular felt a bit strange to me.

I was less and less keen to go out – preferring to stay indoors and – supposedly – tinker away at various creative projects (being human beings yourselves, I’m pretty sure you can tell how this ended up most of the time).

So I began to hope that the end of November would prove to be something of a release, and that December would make for a nice fresh start.

With the Malta Comic Con in town over November 30 and December 1, it seemed like a fair enough assumption to make, and I’m glad I was proven right.

The ‘Con, having been around since 2009, has been growing in reputation and quality with each passing year, and I certainly felt this year’s edition was an ‘upgrade’. Not just because big-name creators were once again in attendance – The Walking Dead’s Charlie Adlard, Game of Thrones storyboard artist William Simpson and ‘Lucifer’ writer Mike Carey being just a small fraction of them – but also because the attendees appeared to be as enthusiastic about the experience as the organisers.

It’s a motley gathering, as any ‘Con should be, I think: there’s those who come to tastefully sample the wares on display and those who make a beeline to the venue, foaming at the mouth because they’ll get to share breathing space with some of their favourite creators.

(All despite the rain: an important caveat considering the Maltese’s often hysterial attitude to the falling-water-from-the-skies phenomenon.) 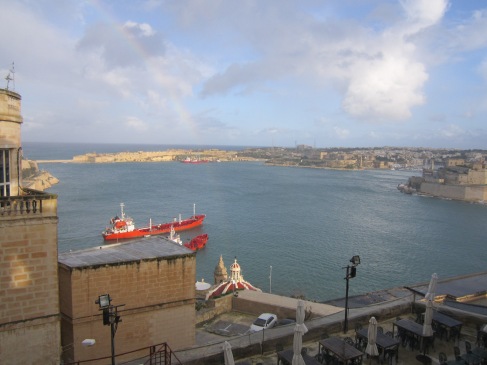 Cosplay, previously something of a halting sight at this particular ‘Con, was very well represented this year: I was often intimidated by stampeding groups of anime-inspired characters, while other costumes were so well-crafted that they came close to resembling the ‘real thing’ (be that Batman antagonist Bane or Jack Sparrow… and yes, I realise that ‘real thing’ may be a poor choice of words here).

There was a healthy mixture of ages and social groups among the attendees too – a polar opposite to the cliqueish exhibition culture that often asserts itself at other art events – often at the very same venue where the ‘Con itself was held (Valletta’s St James Cavalier). But the difference is not just down to the attendees.

Crazy artists (Widdershins, left) and their editors (myself, right) were also present.

Comic book fandom, by its very nature, foments a completely unpretentious appreciation of art. Instead of self-conscious fawning, you get entirely unselfconscious gushing.

(Though a visit by Prime Minister Joseph Muscat was a heartening reminder that the ‘Con’s reputation as a quality, audience-grabbing event is growing, I’m afraid he fails to win the Coolest Official On Show Award. That honour would have to go to US Ambassador Gina Abercrombie-Winstanely, who enthusiastically did the rounds while wearing a Star Trek shirt.)

But there were quiet moments amidst the madness too, and I was lucky enough to sit in for one of them. Giving a reading of his upcoming novel The Girl With All The Gifts, Mike Carey also took time to answer questions from the intimate group that had gathered at St James’ Music Room for the occasion. 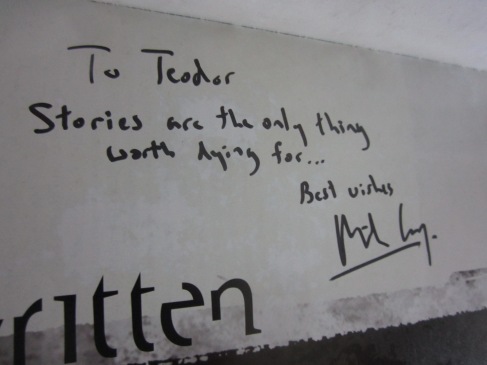 The genre-hopping British writer spoke, among other things, about the differences between prose fiction and writing for serialised comic books, and something he said resonated with me due to a kinda-secret project I’m working on at the moment.

Read: not that secret at all. (Credit: Widdershins/Nel Pace)

Speaking about the way comics are structured as stories, Carey said that “you can’t do it scene by scene”.

That mulling over period is essential when it comes to planning a sustained piece of fiction – more so when it’s a more dramatically ‘tactile’ thing – when it’s a story delivered in conjunction with a visual element, like a comic book, a film or a play.

It’s something I’ve rather enjoyed doing over the past day, aided by a purchase from yet another inspiring event held in tandem with the ‘Con – Patches Market. The notebook shown below – courtesy of the ever-brilliant, ever-meticulous Sarah of The Secret Rose – has been serving as a repository of notes, ideas and in-character psychological rationalisation towards a project that will only be coming into full fruition next year. 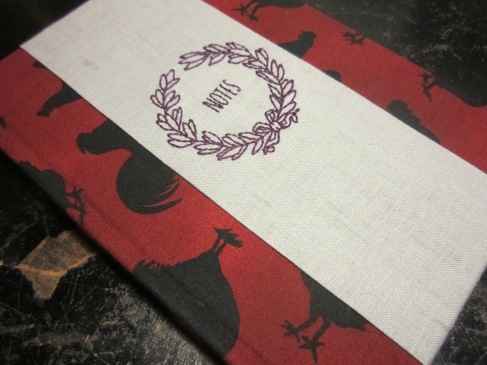 It’s a thoroughly unromantic thing – Wordworth: “we murder to dissect” – but I find it necessary. It’s one of the many things that writing ‘Two’ has taught me… and it was a long process, one which started during a particular November, some four years ago…