In the Polish-Czech co-production Spoor (Pokot), released earlier this year and directed by the acclaimed Polish filmmaker Agnieszka Holland (who also serves as co-writer), Janina (Agnieszka Mandat-Grabka) an animal-loving former engineer living on the Czech-Polish border starts to see her dreadful poacher neighbours disappear one by one, soon after she loses her beloved dogs.

In Okja, directed by Bong Joon-ho and released by Netflix earlier this year, a young girl from the Korean wilderness, Mija (Ahn Seo-hyun), has her GMO-enhanced ‘superpig’ Okja taken away from her by the corporation that made it in the first place (the ‘Mirando Corporation’, fronted by the creepily upbeat and aching-to-be-hip Lucy Mirando, played with typical aplomb by Tilda Swinton). Being the biggest and most beautiful of its lot, Okja will be paraded around in New York before being sliced up into sausages and other treats. 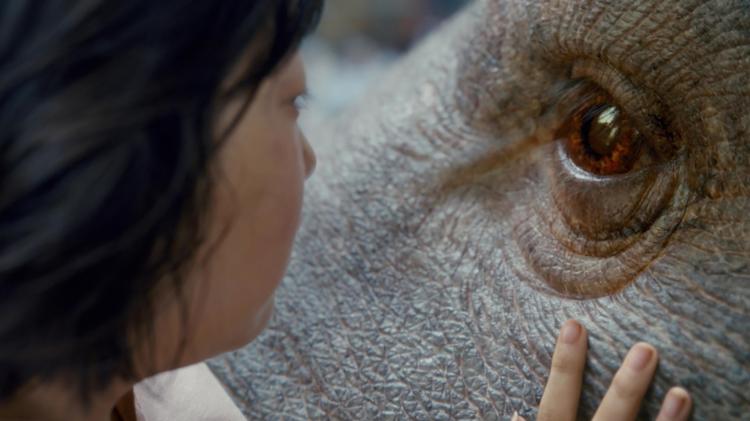 Both films are inspired genre mashups operating to varying degrees of success — with Okja’s maddened but heartfelt modern fable coming up tops by a wide margin — and both have female protagonists on the opposite side of the age spectrum who are made to struggle with the brittle fault-line between the ‘animal’ and the ‘human’.

In Mija’s case, the girl forces herself out of her comfort zone in a foolhardy mission to America — where she is helped along by the Animal Liberation Front, a group of rag-tag animal rights activists who make Okja’s cause their mission… only to later reveal their true mission is to use Mija’s best friend as a mole to help them reveal the extent of the Mirando Corporation’s callous exploitation of the natural world.

Janina, on the other hand, is the village eccentric — the loony or idiot, if you want to be less generous, and the poachers who ring her existence and make her life a living hell — all the more because they’re aided and abetted by the legal, commercial and clerical strands of her community — are certainly happy to view her as a pitiable nuisance, at best.

Holland’s film — co-written by the source novel’s writer Olga Tokarczuk — muddles some of its narrative and thematic targets along the way, but its most interesting strand is the positioning of Janina herself. Hiding the main secret of the film in plain sight for a long stretch of its running time — it is finally revealed that Janina herself is the mysterious hunter-killer — she is presented as the ultimate unhinged ‘do-gooder’. Lacking perspective and a convincing way to make her case — her unquestioning belief in astrology is likely to alienate her from the bulk of the audience’s sympathies — her questionable mission only gains a truly humane backbone when she lets in some ‘allies’ into it.

Indeed, both Mija and Janina gain their small environmental victories by finally leveraging their ambitions with the realities of the world. There are crucial differences between the two, however. While Mija starts off as naive, learning that Okja is only one small part of a wider ‘family’ of superpigs, and whose very origin — and, sadly, fate — is a deeply disturbing matter, Janina’s starting point — and main psychological obstacle throughout — is a generally ‘cracked’ view of the world.

In some ways, it’s easy to imagine that Mija could easily have become Janina in a future iteration. Somebody whose love of a seemingly innocent natural creature — a love that, crucially, blossoms in an idyllic rural environment — is eventually corrupted into a resentment that gives way to a form of insanity. But it’s also worth noting that both films end on similar beats: with both ‘families’ — Mija, Okja and her grandfather; Janina and her allies in a secluded farmhouse commune — finding some form of solace after having accomplished their respective ‘missions’, to varying degrees of success.

Once again, Okja proves itself the more elegant film. The ending is not a pat reward for both the audience and Mija herself. While an inner peace may just radiate from the scene — the oblique benefits of Mija gaining wisdom from the experience, her slowly-curling smile as Okja conspiratorially whispers into her ear — it is also unquestionably dripping with melancholy. She is “sadder and wiser” for having undergone the ordeal of getting Okja back, and of learning that it was all just a tip of a very nasty iceberg. It is a fitting end for a true hero’s journey: a coming-of-age story where the sudden onset of ‘age’ is actually felt in Mija’s muted enthusiasm in those final scenes.

Spoor is, true to form, clumsier in this regard; rewarding Janina with a commune for her vigilante efforts (and it’s a full-blown commune indeed, as Dyzio and Dobra are shown to have had kids so as to ensure the little society’s propagation). But in both films, what shines through is the necessity of searching for communal solutions to problems caused by individualism. The do-gooders of both films — Janina, and the Animal Liberation Front — are both shown as deeply flawed. But their efforts yield results precisely because they veer away from the individualistic approach to life we’re all encouraged to participate in.

We are trained to believe that the inherent problems of a set up like the Animal Liberation Front are enough to nip such an effort in the bud. And while it’s impossible to condone Janina’s murderous rampage — save for the emotional catharsis it provides to the viewer in the immediate term — it is the oppressive and fully sanctioned logic of murder for sport that the poachers engage in which have in fact pusher her over the edge. It is then up to her cluster of support — similarly sidelined kindred spirits — to rehabilitate her into a society that offers a better alternative.

A society — a commune — whose presentation may come off as being a tad contrived, but which remains a testament to how fiction can be useful in helping us lay down a blueprint for something better.

Human hypocrisy and short-sightedness should never be the last word on any phenomenon that exists on this world — be it natural or social. We will always make mistakes and blunders along the way; and we’ll tend to either forget some of the more vaunted commitments we may make in our quest to create the conditions for a better, more equal and overall ‘healthier’ world.

But while this does not mean letting the most egregious offenders of the hook, as both of these films show, the ambiguities of the situation should not be ignored, or brushed off as weaknesses or irredeemable shortcomings.

Success is a totem often built of smaller, chipped and cracking versions of the same, and we can only really achieve true progress by not giving these smaller bits a hard time along the way.