As outlined in an earlier post, in the coming weeks I will be dedicating an entry to each story in the new anthology Swords v Cthulhu, edited by Molly Tanzer and Jesse Bullington and published by Stone Skin Press. My reviewing method will be peppered with the cultural associations that each of these stories inspire. These will be presented with no excuse, apology or editorial justification. 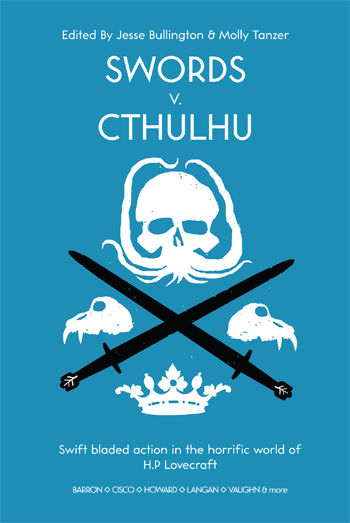 The Argonaut by Carlos Orsi

In their introduction to the anthology, Tanzer and Bulllington described Brazilian author Carlos Orsi’s contribution as ‘Errol Flynn Goes To Hell’, and it’s a tantalizingly accurate description of what goes on in this ghoulish swashbuckler of a tale.

But the real hook of the story for me was the fact that this takes place on a Maltese vessel in what we can assume is roughly the Golden Age of piracy — and given that the Order of the Knight of St John had no qualms about sponsoring corsairs during their soujourn on the island, Orsi’s choice of setting and conceit is as apt as they come.

Nevertheless, the naval politics of the 17th century and their corresponding geo-historical context only matter up to a (sword) point in this fast-moving tale, whose key qualities lie in its cinematic scope and pace. Orsi conjures up some great images, but more importantly, he makes sure that things are constantly in motion. Stylistically, this is the polar opposite of Lovecraft, whose trembling paranoia inspires gloriously knotted prose that slowly but surely unravels a terrified but richly imaginative mind.

One would be tempted to throw Pirates of the Caribbean as an easy reference point for this tale on an unfortunate seaman charged with rescuing the husband of a Christian virgin aboard the aformentioned Maltese ship — which is assailed by shoggoths (subordinate figures in Lovecraft’s bestiary). Davey Jones would be the obvious figure that comes to mind once the bewitched sailors turn monstrous.

But Orsi’s prose — down to its rapid-fire style — actually recalls a more significant forebear: the work of Tim Powers. After all, On Stranger Tides was not just yet another (and ultimately disappointing) installment in the Pirates of the Caribbean saga. It was actually the book that started it all: inspiring not just the theme park ride that in turn gave way to PoC film franchise, but also that other piece of piratical pop culture lore — the Monkey Island video game series.

And Orsi’s story, with its no-nonsense protagonist and equally no-nonsense approach to storytelling and style, channels Powers’s ability to grip the reader and keep them there. The supernatural is a by-the-by inconvenience here, but a real one nonetheless; much in the same way as Blackbeard’s meddling with the dark arts is a key obstacle for our protagonists in On Stranger Tides.

Whereas the other story in the anthology to channel pirates does so with added lyrical and surrealist gusto, Orsi’s tale provides some classic thrills.