We can’t manage to catch a break in Malta, can we? It’s been at least since last November that some kind of mental stability or continuity — the latter being a repeated slogan in the party leadership campaign that was to crown the November madness — was the norm in both public and private life.

I was actually on a break of sorts when that first crisis hit. High on the freshly released fumes of success generated by our being awarded the inaugural Malta Book Council feature film fund for our feature film adaptation of Alex Vella Gera’s Is-Sriep Regghu Saru Velenuzi, I decided to go for an early, modest version of a writerly fantasy and booked a ‘writing retreat’ at the sister island of Gozo in off-season.

It was a no-brainer, at least in theory. I chose to stay at the notoriously quiet village of Gharb, with a pipe-shaft view from my typing window and grossly over-pixelated landscape printouts hanging by the bed. So, no distractions there. The breakfasts were also nice and energising — full English, with a dollop of French sweets and Gozitan cheeselets on the side — and having paid in full for room and board meant that I was internally pressured to get cracking on the reams of research and story development that needed to be done. 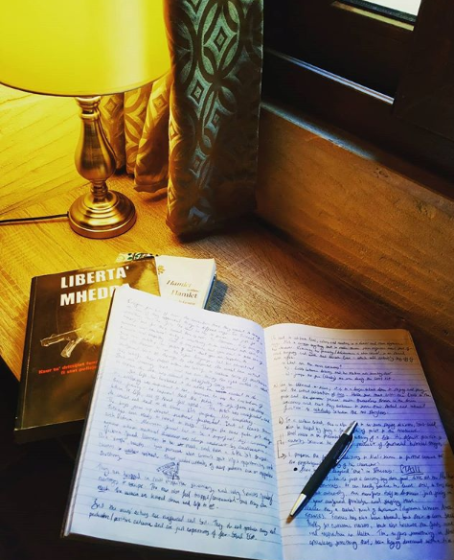 But the trip also coincided with the arrest of Yorgen Fenech, so I could forget all about isolation and silence, in the broadest sense of the word. How could I resist checking my phone when the political status quo of the island was being dismantled right before our eyes? Not least when the project itself hardly offered a neat cutoff point: my research dealt with political violence and corruption in 1980s Malta, and if anything was to be salvaged from the distraction it was that the resonances between then and now ensured that our film will be laced with an enduring, if unfortunate, relevance.

With the fallout came the protests, and an unprecedented political crisis culminating in the resignation of then prime minister Joseph Muscat and the election of Robert Abela in his stead, with a reshuffled cabinet following suit. As alluded to above, ‘continuity’ was the watchword, and Abela — to the cynical chuckles of many — quickly declared that ‘normality’ has been restored to the island.

The onset of the global covid-19 pandemic makes short work of precisely that kind of rhetoric. We have seen how it’s served to symbolically unseat the likes of Donald Trump, whose bluff and bluster collapses ‘like a flan in a cupboard’ when faced with a threat both invisible and undeniable. Though I would caution against declaring that ‘the Trump presidency is over‘ so categorically — the orange oaf has survived a record amount of scandals — watching him scramble for some political purchase while playing the same old xenophobic tunes is just farcical at this point.

But it’s not just limited to politicians. The sight of suddenly quarantined celebrity actors deciding to make use of their newly housebound condition to splice together a group singalong of John Lennon’s Imagine — “Imagine there’s no people” is hardly the thing you want to hear while a murderous pandemic continues to spread on a murderous rampage of the elderly and otherwise vulnerable — also points to the tone-deaf nature of another privileged class.

The cluelessness of the global rich is hardly news — Best Picture winner Parasite all but rendered it into an archetype, and these elites are actually nice — but a pandemic has away of making it all come out like a particularly eye-grabbing Lovecraftian bas relief.

So yes, we’re still very much not getting a break right now: not from the bone-headed stupidity of the global hegemony, not from the callousness and stupidity of those at the top. But we’re joined in this worldwide, and while the imposition to enforce ‘social distancing’ certainly lends fuel to the fire of certain xenophobic tendencies informed by the idea of the infectious and corrupting nature of otherness, we’re also getting to see limits of our status quo.

A status quo within which, as a self-employed freelance writer, I am likely doomed to remain on the fringes of, for better or worse.

(Here’s the bit where ask anyone who’s reading this to consider making use of my services as a journalist, content writer or scriptwriter during these trying times, as existing clients start to bail and any prospective ones suddenly be).

Perhaps some would call the largely worldwide self-quarantine a break of some sorts, though of course it’s not that, not by a long stretch. But it’s certainly a break in the aggressive sense, a rupture of the old routines we’re now scrambling to become accustomed to, with varying degrees of success, and each in their own way.

I’ll try to keep chasing the resonances. Even if they’re not all pleasant ones. Because in times like these, some kind of internal coherence is what we need more than anything else.

So, the sixteenth issue of ENCORE Magazine, which I have been editing since it’s eleventh edition, should soon be out and about in its designated pigeon-boxes across Malta and Gozo, after having debuted last Sunday – nestled as it was in between the pages of the Malta Independent during a particularly torrential day.

Below is the text for my editorial for this issue, which covers the period of March-May 2019. Being a quarterly magazine, the trope of the seasons is difficult to wriggle out of when writing these things, I’ve realised. But then again, why even bother? In the end, what is more enveloping than the climate? We Maltese Islands-dwellers learnt this the hard way last weekend, and the world will have to lean into its realities even harder once climate change truly hits a stride…

But in the meantime! 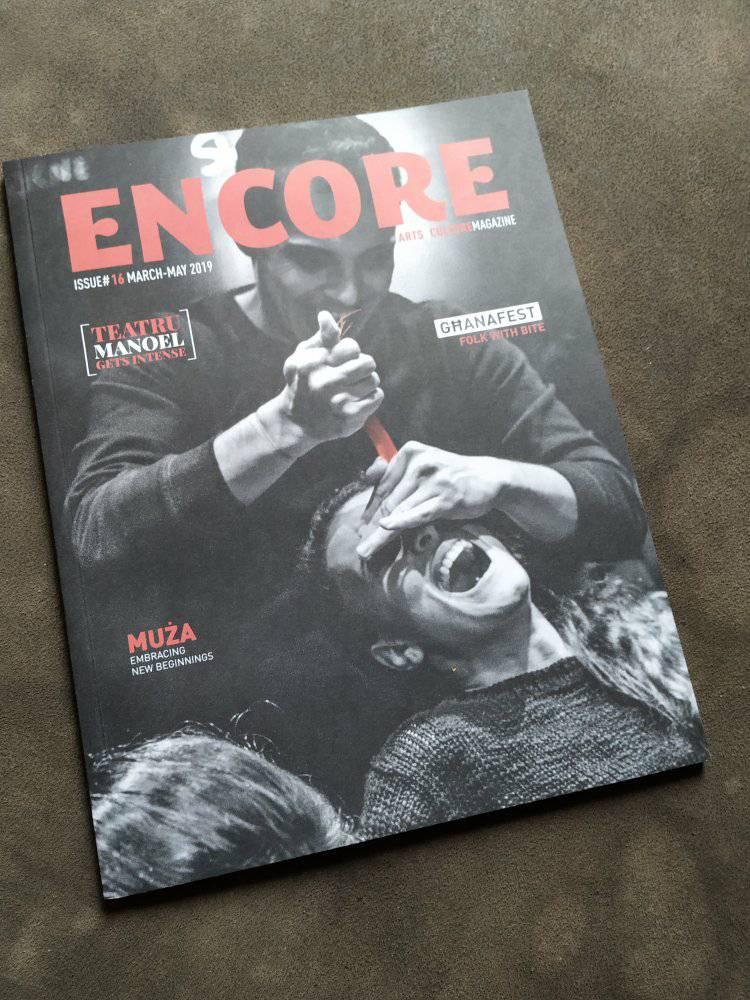 An apposite atmosphere of fresh beginnings wafts over this edition of Encore Magazine, and I for one could not be more glad at the aura of promise that this brings about for the Maltese cultural scene at large. We delve into not one, but two, art spaces in Valletta: MUZA and Valletta Contemporary — showcases of the visual arts whose legacy, angling and approach may be different, but which nonetheless stand as a testament of both an active visual arts scene with no small modicum of both public support and enthusiastic private patronage.
The two entities, both in their early stages, could also be seen as craning up (chin held firmly up) as the smoke of Valletta’s tenure as European Capital of Culture begins to clear.
But it is not just cultural initiatives that are rising from the ashes of the busy and hectic year that was 2018. Even the island’s most prominent public cultural body looks forward to some refreshing changes, as is evident from our interview with Mary-Ann Cauchi, the new Director of Strategy at Arts Council Malta, who outlines her vision of a holistic and democratic approach to public funding and support for local artists.
But neither are we forgetting about the roots of the matter — that is, the education of budding artists, now given a boost thanks to the additional availability of so-called VET subjects. A student fills us in on the revealing progress of pursuing an educational path less taken, and that allows for flexibility and uncertainty: such a necessary component of any honestly-undertaken creative endeavour.
Speaking of generational developments and creative flexibility, we also delve into the perception of nudity and sexuality in the Maltese visual and theatrical arts; in what can serve as an addendum to our consideration on the evolving attitude towards censorship in a previous issue. And in another further gentle jolt to preconceptions, the latest edition of our Encounter running feature pits a tattooist against a filigree artist, in a conversation that shines an interesting light on the blurry fault lines between ‘art’ and ‘cosmetics’.
This is, of course, all counterbalanced by insights into the exciting events that lie ahead during the Spring of 2019, reminding us once again of the truly refreshing pleasures of new beginnings.

As ever, I would like to thank Encore Magazine director Ruben Zahra, proofreader Tricia Dawn Williams and the team at Kuluri (Reuben Spiteri and Daniel Borg) for helping put together this challenging (read: post-Christmas) edition of the magazine. Thanks also go to our many contributors. The magazine can also be viewed online.

Streets decked out for the festa, but eerily silent all the while.

Narrow passageways whose rock is a trademark yellow, a yellow made yellower, it seems, by the lamplight at night and the sun during the day; more yellow than the yellow rock in Malta, the flaking yellow of globigerina limestone, the flaking yellow of Twistees (and that’s when you finally figure out why it remains the national snack). 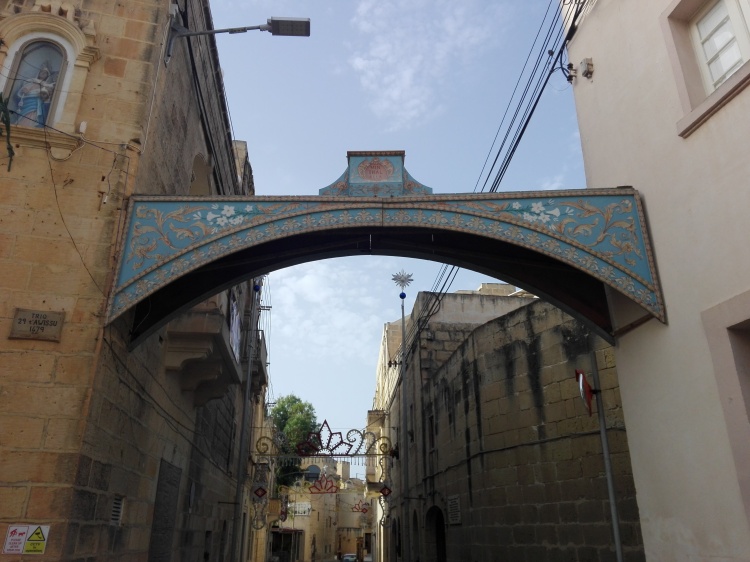 Streets that are passageways, yes, passageways that lead to even smaller nooks. Some house a pack of cats; an adorable sight for those so inclined. But this pack is skinny, mangy.

You walk past them regardless — because it’s the done thing — but the cuteness radar does not blip this time. In a Disney cartoon, this bunch is the pack of dangerous street urchins. Where anthropomorphism acts as euphemism too — were they human and in an R-rated film, they would be drug dealers and murderers.

The heat is as strong here as it is in Malta — a division, a distinction that will doubtlessly sound absurd to many outsiders — but the quiet reigns supreme. Memories of the smaller villages in the mother isle during the nineties. When you’d peek outside only to be blinded by the yellow stone of the opposite building. When (the nostalgic haze suggests) people took the siesta seriously. 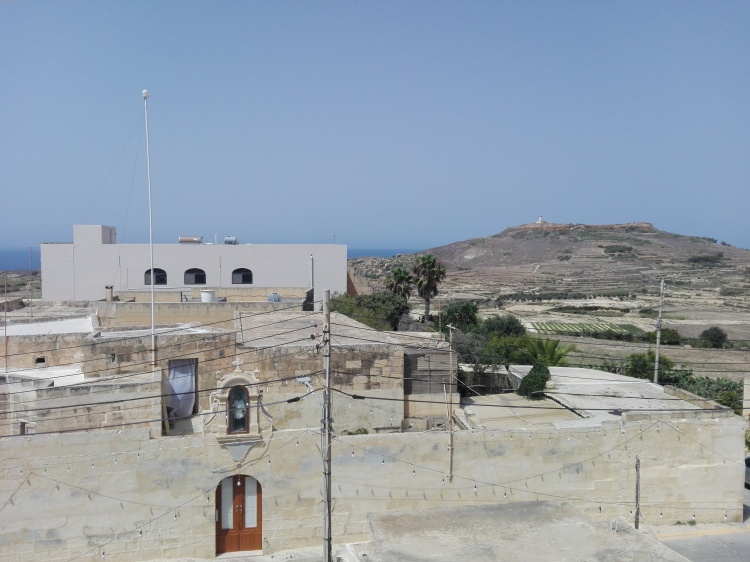 But maybe the distinction is not so absurd after all. We meet foreign visitors — Italians, Germans; smiley, homey, bohemian but polished — who proudly claim to never have set foot in Malta, apart from the trip to the airport. “We’ve been coming here for 25 years,” they’d say, save for perhaps a ten-year break somewhere in between. But they’ll stick to Gozo, thank you very much. Malta is far too chaotic.

It makes you think. About how we fetishise smallness and isolation. How tourism makes us look at places as mere service providers. In this case, a glorified massage parlour for the mind and soul. 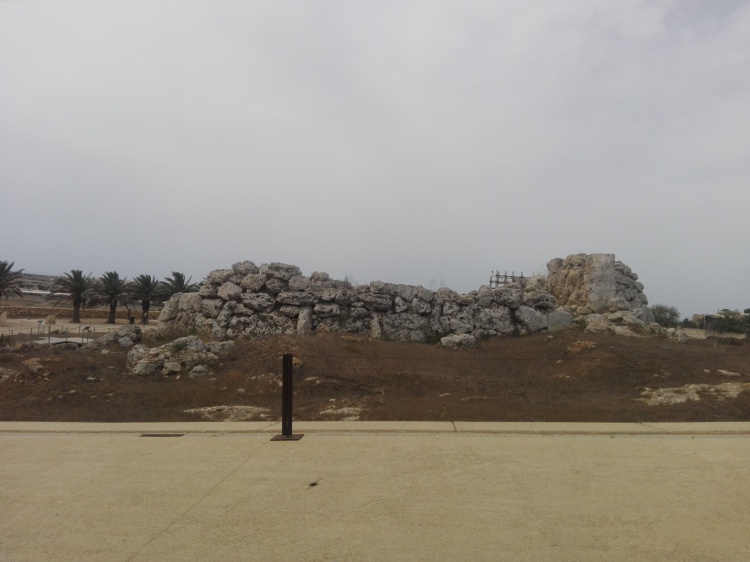 I fell under the spell at Ggantija, though. You worry about the packs of tourists filing in, at the beginning. You wonder what compels people to book trips on package tours, where any individual experience is washed away by the rank-and-file schedule of cramming in sights on deadline and budget. 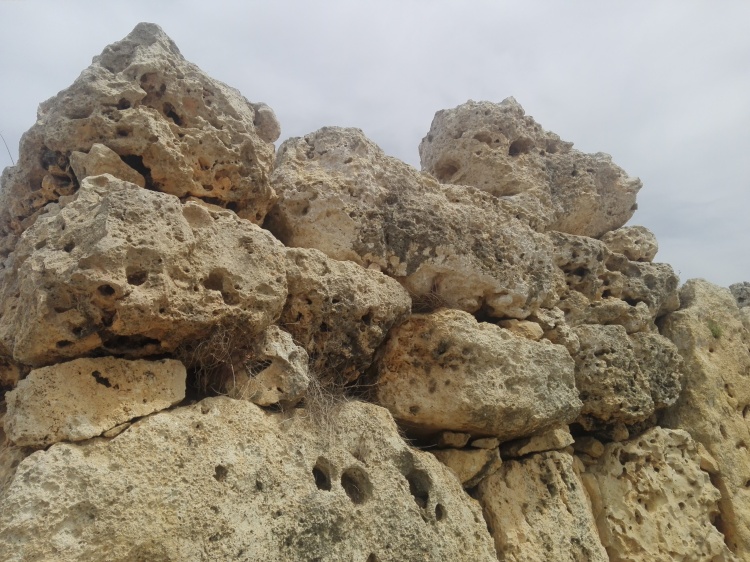 But they dissipate, soon enough. They get lost somewhere between the museum, the (tasteful, non-intrusive) new passageway and the temples themselves. 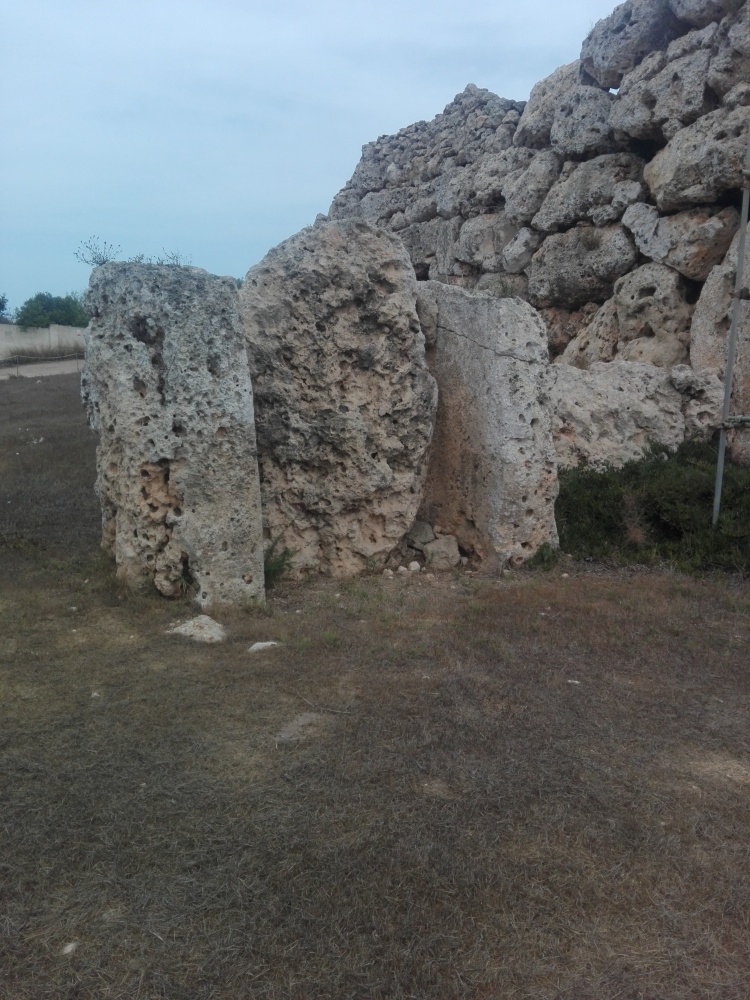 Stones arranged in their precise but mysterious alignments. Pock-marked with holes (some strategic, some natural, most baffling), which make plenty of room for the vegetation to seep back in. 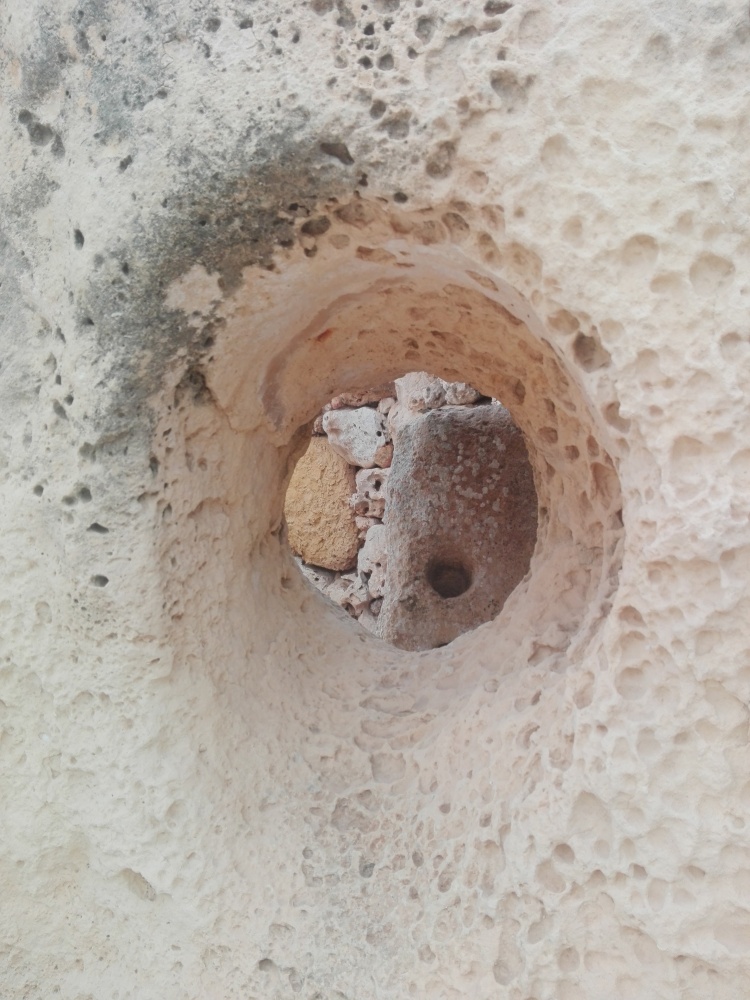 There’s graffiti too, some of it dating back to the 1800s, and most of it French. When we visited, it was a cloudier, windier day than most. I was filled with gratitude. To be able to see and feel that place, under those conditions. To stop time for a while, in a place that demands very little else of you. 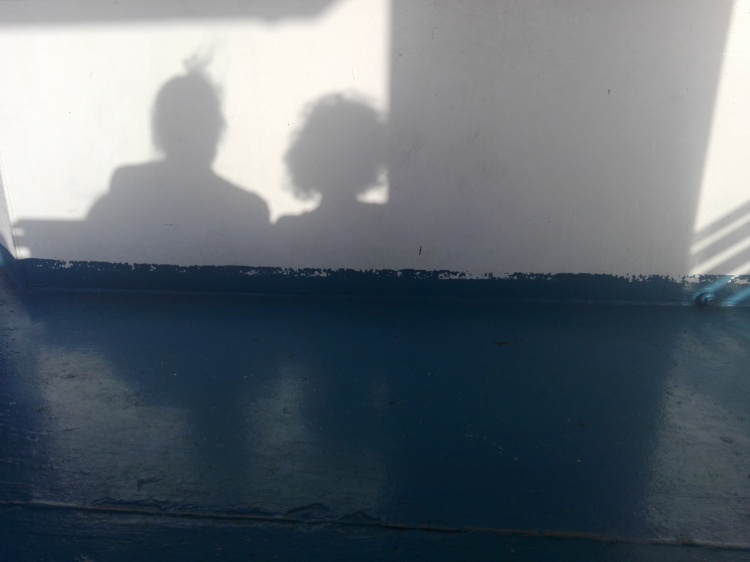