“I was taken with the thought that these were dream homes, literally: here was space from which history had been expunged, and an optical illusion of history set up in its place. The real houses were elsewhere on earth. Was this what one built when one lived with a sense of being precariously positioned in space and time? I imagined them all to be sleeping an enchanted sleep that would go on through the years, until they were embedded in a thick enough buildup of time to wake without vanishing into the air” – KJ Bishop

Don’t know if it’s down to coincidence or something deeper (never visited the region + not an anthropologist) but I’m really happy to have discovered two great works of weird and wonderful fiction from Australia that I’m enjoying more or less concurrently.

One was less accidental than the other though. I had enjoyed KJ Bishop’s debut novel The Etched City immensely, so upon discovering that she had self-published a collection of short stories and poems, I was sold from the word go. So far it definitely doesn’t disappoint.

The collection is what I’d like to call ‘unaggressively strange’ – Bishop’s ease with language and her appreciation of the Decadent idiom gives the tone of the work an unapologetically ‘decorative’ quality that couches her zany imagination into something consistently enjoyable.

The overall feel of ‘That Book Your Mad Ancestor Wrote‘ is that of a cabinet of strange delights… due in no small part to it being a self-published work and so free from any overbearing commercial strictures.

Testament to its freewheeling, ramshackle variety are the poems accompanying the stories – surreal feasts of language, placed like addenda at the end of the book but in truth – and in spirit – reflecting the joyfully insane feel of the rest of the book.

Though commenting on a book before you’re even done may seem silly or even crass, I can’t help but enthuse about Anna Tambour’s Crandolin. 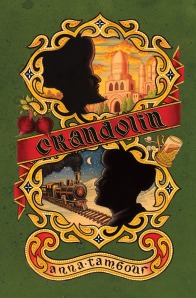 Speaking about the art of criticism, Oscar Wilde said that, just like you don’t need to consume an entire bottle of wine to determine whether it’s any good or not, so a critic should be allowed to pass judgment on a work of art without having to have experienced it in its entirety.

Of course the statement is just a witticism to be taken with a heavy pinch of salt, but Tambour writes with such frenzied confidence (yes, a paradox worthy of Wilde) that her narrative voice alone is enough to convince me that she’ll carry her vision through to its end.

Using the titular magical device as a MacGuffin to pull a strange array of characters together (think Aladdin’s lamp, but if its gifts were less materialistic and more sensorial) Tambour lets her tale cumulatively paint a vivid picture. There’s no laborious world-building here: the reader is shoved straight into the detail, and save for a final destination involving the Crandolin serving as the figurative dangling carrot, we’re never sure where this is all headed.

Which is where Tambour’s grasp of language can really come out to play. Rhythmic, jokey and always at the ready with a wry (and not cringeworthy) pun, it works in perfect tandem with the craziness of the story so far.

I’ve been trained to nitpick – both academically and professionally. Which is why it feels good to gush sometimes.